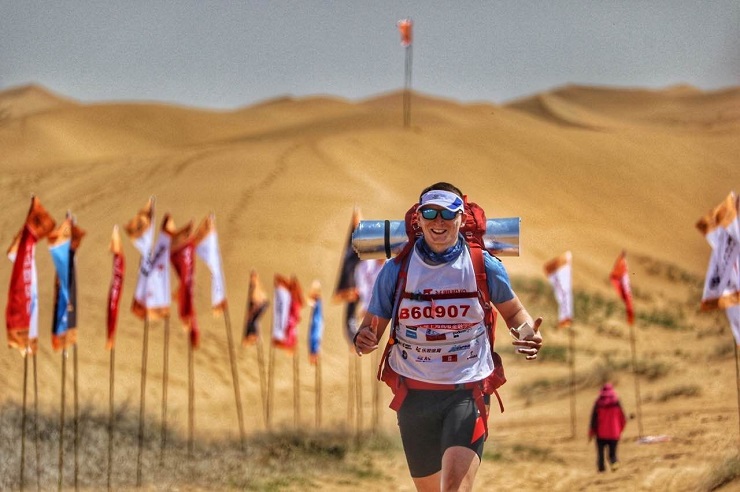 He is confident, humorous, cordial and open-minded. He is a German son-in-law of a Chinese family, who speaks Chinese fluently with a slight Shanghainese accent. He is a warrior full of adventurous spirit and has recently won the 6th Asian Business School Desert Challenge. Let’s follow Matthias Keschka (MF 2014 alumni) to his exciting journey in the East.

Matthias Keschka’s Chinese name is 王德. He chose this name during his registration at the police office. He thinks 王(Wang) is a simple family name and 德 (De) can indicate he is from Germany. During his bachelor program at the University of Mannheim, the top-ranking business school in Germany, Matthias was awarded an internship at BASF M&A Department in Hong Kong. Supported by the scholarship provided by Confucius Institute, he also spent one year studying Chinese at Shanghai Jiao Tong University, which further enhanced his passion for China. Starting from his initial interest in Chinese culture through to his love, education and career in China, his oriental adventure has been full of excitement.

Matthias is the eternal challenger, and for him, SAIF is one of the challenges. He said that when considering which MF program to take, some people like his professor and future fellow classmate Xiang DING offered him sincere advice, which helped him get a general idea about all leading MF programs in China. After careful consideration, he decided to apply for SAIF MF Program for mainly two reasons. Firstly, SAIF MF is extremely internationalized. And secondly, it focuses on finance and is more challenging.

The courses that impressed Matthias most include Prof. Fei WU’s "VC PE" and Prof. Tan WANG’s "Financial Mathematics". The former gives inspirations to his current career, while the latter fits his passion for mathematics. "The courses are all quite challenging, but they also train our mindsets. Prof. Tan WANG is good at hands-on coaching. The fact that Chinese classmates are particularly strong in mathematics doesn’t reduce my enthusiasm." 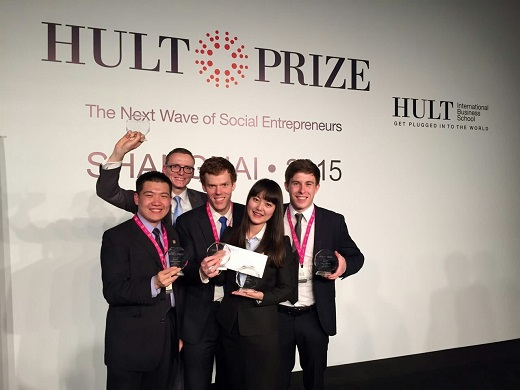 The Asia Pacific Regional Championships of the 2015 Hult Prize is another challenge faced by Matthias during his study at SAIF. Initiated by Ahmad Ashkar in 2009 and supported by Mr. Bertil Hult, founder of English First (EF), this prize partners with the Clinton Global Initiative and is awarded by Bill Clinton, 42nd President of the U.S., in person. It is designed to encourage worldwide college and university students to find solutions for the greatest social issues in the world with the most creative ideas. Comprised of Matthias and four other team members, including Michael Custer (MF2013) and Callum Porter-Harris (MF2014), the teleStory team defeated 38 other teams in the contest, including teams from Tsinghua University, Peking University, Cambridge University, Hong Kong University of Science and Technology, University of Pennsylvania, University of Toronto and the National University of Singapore, and won the Asia Pacific Regional Championships, becoming the first Chinese champion in this category.

Prof. Jiang WANG (first from the left), Mr. Jian CHENG (second from the right, Angel Investor of teleStory and Chairman of Yinghua Fund) and the team supporters at the final competition 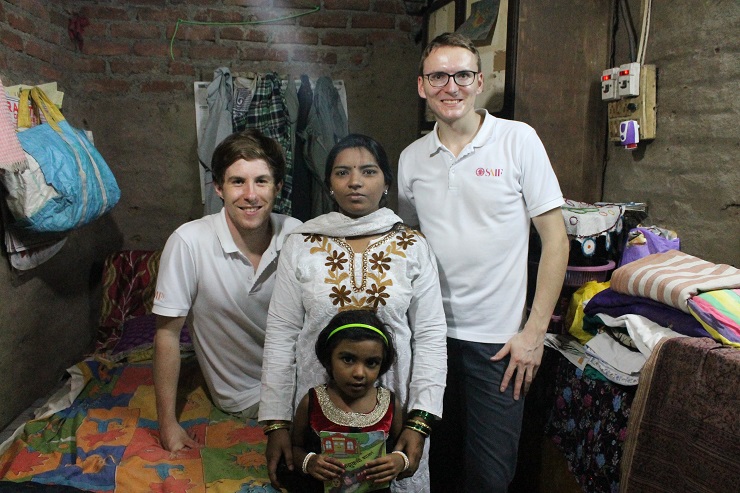 Callum Porter-Harris (first from the left) and Matthias with a family in the slums of Mumbai, India

"It's a rare and amazing opportunity. It all began with an idea or a rough business model, which soon evolved into a proposal. Starting in February 2016, after we won the Hult Prize Regionals, we managed to raise 300,000 RMB in just four months. We engaged in a pilot in Dawu County, Hubei Province and were part of a startup incubator in Boston, USA. We also started teleStory India. We spent two months there and went through its initial business development and local content development phases. It’s an exceptional entrepreneurship experience." Matthias was still excited when recalling the competition, when the team presented its idea to Mr. Clinton, Nobel laureates, billionaires and thousands of people. "Though we did not win the final, it was an extremely important and good experience."

During our interview, two words were frequently heard. One was "challenge" and the other one was "lucky". Matthias considers himself a lucky boy, from the enrollment at SAIF, the victories in various competitions and gaining the job offer at Fosun. In addition to a number of life-time decisions, he also got married with his Chinese girlfriend during his study at SAIF after a 8-year relationship, "Arguably, all of these things call for hard efforts, but luck is also essential." 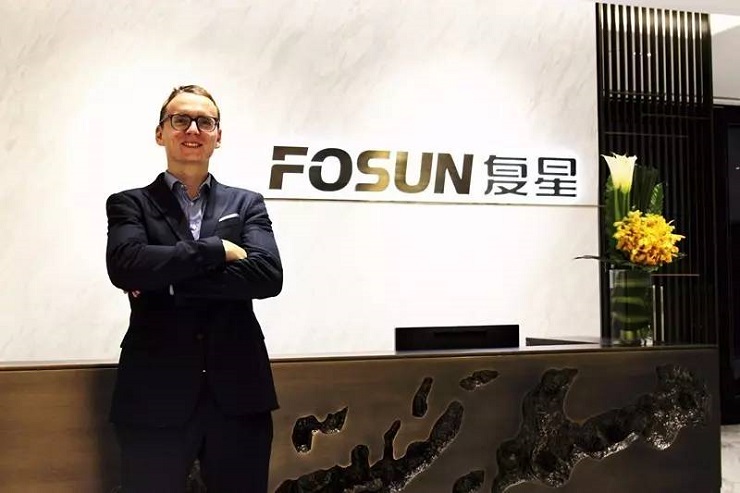 Upon his graduation, Fosun is in urgent pursuit of foreign talents who have certain knowledge about China, Chinese culture and Chinese language. Prof. Hong CHEN recommended Matthias on the request of Mr. Xinjun LIANG, one of the SAIF DBA alumni and CEO of Fosun Group at that time. However, Matthias almost rejected Fosun’s HR call, thinking it might be a scam. However, Matthias had already got an offer after a few weeks. Fosun wanted to recruit full-time staff, however Matthias could only start as an intern as he had not graduated yet at that time. Thankfully, Fosun's HR persuaded his boss to give him an opportunity to try.

After a period of probation, Matthias realized that Fosun is extremely suitable for young talents. "For young folks, Fosun is wonderful, because there are more learning and networking opportunities than in any other Chinese company. You get engaged in a lot of major projects, both domestic and overseas, and you will even have the opportunity to meet presidents or billionaires." In high recognition of its corporate culture, Matthias decided to join Fosun after his internship. Therefore, he officially became part of the Fosun team. 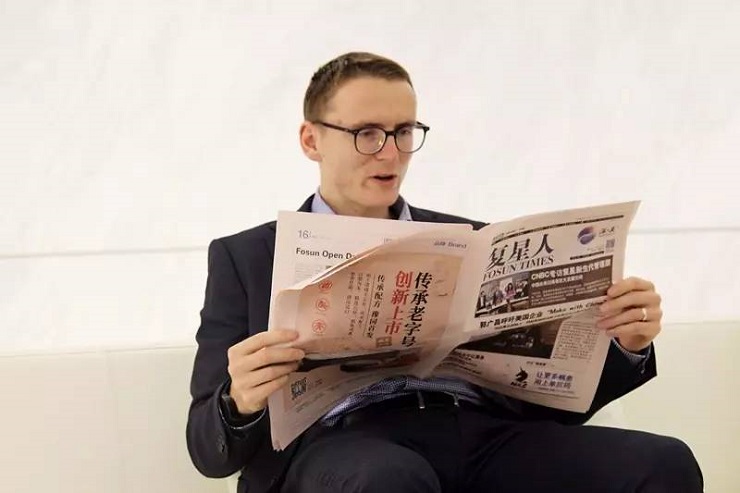 Talking about his current job, Matthias is confident of his potential. "I feel lucky for having participated in three successful projects in the past few months. Though at the moment, I only deal with a small part of these projects, it helps me to build up my experience." Although the workload at Fosun is quite heavy, Matthias thinks that it’s a challenge which can enhance his ability to manage his time and priority.

TRY YOUR BEST, MOVE ON WITH YOUR OWN PACE

Matthias still keeps exercising despite his busy schedule. He used to train gymnastics when he was at a sports high school in Germany. He joined an exchange program and went to the U.S. for 11th grade. He chose to train running at that time as the school didn’t have gymnastics. He won the championship for local competition just after two week of training. Matthias suddenly became a star at school then. And at that moment he realized his talent of running.

Matthias likes collecting minerals and has a deep love for deserts since he was very young. He heard of Asian Pacific Business School Desert Challenge during his study at SAIF, which he always kept in his mind. The Desert Challenge was only open to MBA students at that time. So he took the initiative and contacted the SAIF team leader of the 5th Desert Challenge. After communication with the organizing committee, he finally managed to participate in the competition as a member of the B Team. 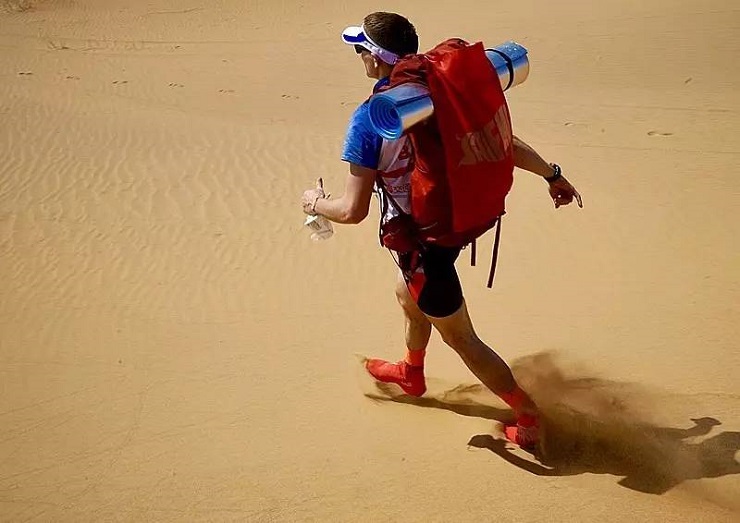 "I love deserts and contests. I’m good at running, but I don’t really like it. However, I did my best as I already made my mind to participate in the competition." To prepare for the 6th Desert Challenge, Matthias commuted to and from work by running. He ran at least 12.5 kilometers every single way. "I have to admit that this was almost too much since I lost all but one of my toe nails at that time."

Everything comes to him who persists. On the first day, Matthias and his team mate Zhong YU were far ahead the third place with a 10-min gap. In the following two days, he stayed stable and was the first to finish. Eventually, Matthias hold the winner trophy of the 6th Asia Desert Challenge in his hands. According to him, "the most important thing in this competition is to maintain your body condition, because there may be a number of serious problems such as a sudden faint, salt depletion or a sprained ankle." It is critical to move on with your own pace, both in competition and in life. 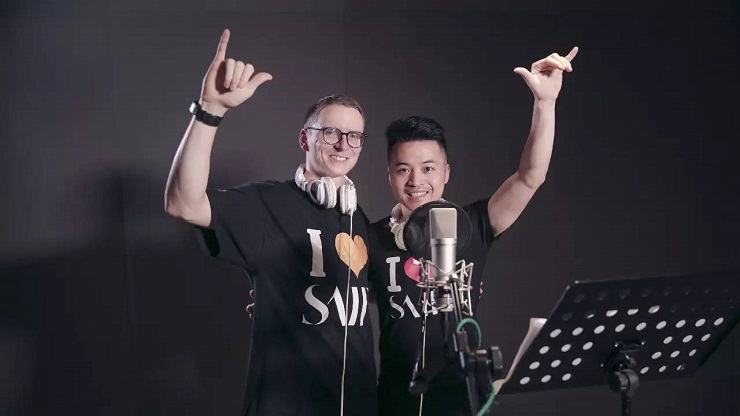 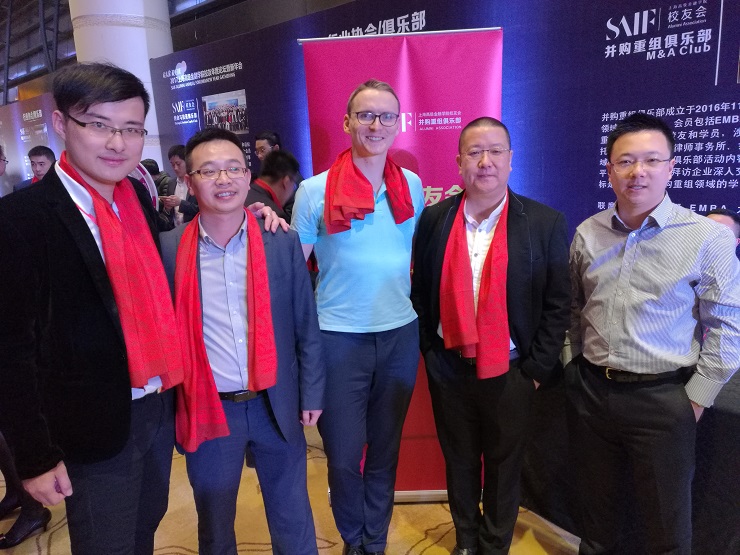 At the end of interview, Matthias mentioned that there are still many foreigners who don’t know a lot about China, Shanghai Jiao Tong University or SAIF. For overseas students who are interested in the MF program yet know little about China, Matthias’ advice is to come and experience China by yourself. Perhaps you will like China. Meanwhile, he also believes that alumni are very valuable resources. It is important to keep in touch and support each other during work and probation. Matthias also shared his insights and advice for international students who expect to develop their career path in China, that is, "Learn Chinese, stay flexible".